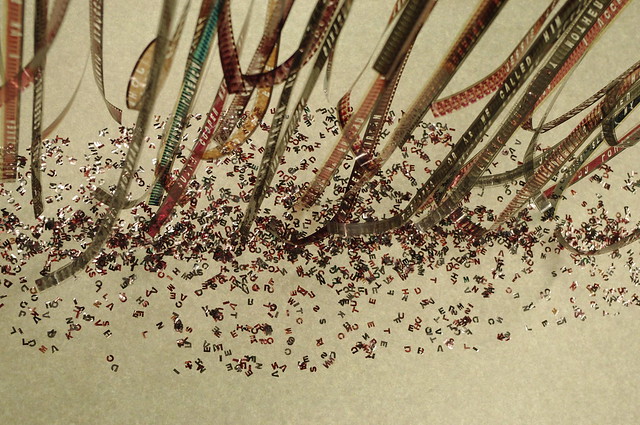 “Atropos, she who cannot be turned, who at death with her shears cuts the thread of life.”


These are the names of the dead; each piece of film is a story.

Some deaths move us intellectually, but leave us emotionally whole. Others tear into our hearts in ways that never fully heal.

These are the names that have been entrusted to me, by people who still mourn.

16mm film is no longer the primary medium for documenting and retelling our stories. Libraries, which used to hold large collections of 16mm films for research and educational use, have switched over to DVDs and streaming video. But unlike digital media, 16mm film is literally transparent, consistently offering its subject up to the naked eye.

These are the stories of the people left behind. In recording them letter by letter, I make each a part of my own story. The contrast between the transparency of film and intangibility of memory is strong for me.

In punching each name through the film, my hands ache.

My father, Antonio Radocchia, died suddenly on March 16, 2013, of a heart attack while driving. He was 81, it was fast, he’d been having a pretty good day, and he didn’t hurt anyone else in the process. It was a good way to die.

But my father’s body had been suffering from increasingly sever emphysema for the previous two years, and he was spectacularly lousy at dying. Normally calm, he was angry and anxious. He didn’t know how to cope with anything he couldn’t fix with his own hands. Before he was sick, he was proud of his accomplishments, but never boastful; he occasionally told me stories of his life, and these were rare gifts which I cherished. But he was diminished by his illness in his own eyes, and while even before he became sick he would never have consented to letting me record his experiences and memories, when he knew he was dying it became an impossibility.

This piece is part of my ongoing effort to understand losing my father and his stories.

You are welcome to share your own story, to be included in the ongoing piece.

Thank you to the Musselman Library for donating the 16mm film used in this piece. Quote from GreekMythology.com

Email ThisBlogThis!Share to TwitterShare to FacebookShare to Pinterest
Labels: 16mm film, installation, work about my dad