I wrote this post on September 12, 2008. I'm reposting it today, with a bit more explanation, in recognition of Michael's enduring work, and of the day he died. 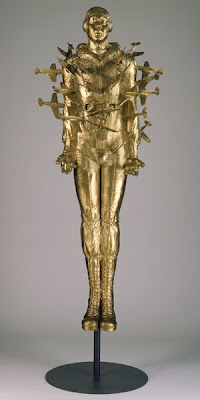 I first heard about the Lower Manhattan Cultural Council’s “World Views” program (which gave artists studio space near the top of the Twin Towers) during a radio segment on NPR in 2000. At the time I was in grad school at Pratt Institute, in Brooklyn, for my MFA in sculpture. I immediately decided that someday I would get one of those studios - it seemed like the most exciting, romantic, awe-inspiring and uniquely-NY place on earth to make art.

Michael Richards did have a studio space in the Towers, and on the night of September 10th, he had stayed there overnight, working. Michael was an up-and-coming artist, in a big way. The piece here, Tar Baby vs St. Sebastian, was included in the The Harlem Studio Museum A-I-R program's prestigious exhibit Passages: Contemporary Art in Transition. In 2001, Christine Y. Kim, Assistant Curator at The Studio Museum in Harlem, and Franklin Sirmans, Independent curator and critic wrote about Michael's work:

That exhibition presented Tar Baby vs. St. Sebastian (1999), a seminal work in his series about the Tuskegee Airmen, where the artist's cast body in the uniform of the airman is pierced with model airplanes. St. Sebastian, the patron saint of soldiers and athletes because of his physical endurance, was martyered for protecting captured Christians he was supposed to imprison.

I'd never met Michael, but had heard about him through our mutual friend, Sharon Pendana. I had a vague fantasy that some day I'd get to meet him through Sharon, and that I might get to visit his studio. At the time, I was more focused on the space than the man...

But when Sharon and I - and the rest of our neighborhood - stood on our street in Brooklyn on the evening of September 11th, tallying up who we knew was safe and who we had yet to hear from, I shared her fear that Michael's last know location had been his studio, and that he was still missing. We never found out exactly what Michael's experience was on the morning of Sept. 11, but we do know that he was in the Tower when it fell.