For Ofrenda 2009 - the most literal piece I've ever made

This is definitely a draft, a 'throw it at the wall and see what sticks' kind of piece. 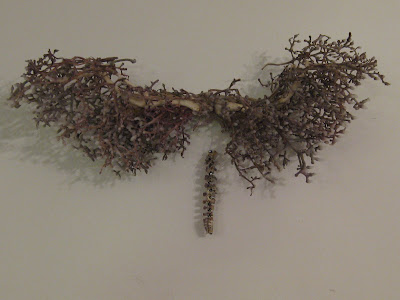 It's definitley not 100% where I want it. It's made in 2 pieces, that previously hung (in 2002) from the ceiling, touching in the middle to steady each other. For this incarnation I made a sort of wax frame, so that it can hang on the wall, but when I made that part I was worried about not having enough of the structure embed into the wax, and as a result I didn't put the two pieces in at the correct angle from each other. So the center bones should come up more in the middle.

The section hanging in the middle is made of chicken vertebrae, strung with beads. I've been trying to figure out what to do with these pieces for a long time (maybe a year?), so this is their first foray into form. 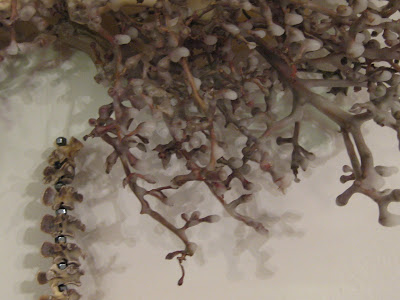 They're sort of working for me...

I think I may need to add something more, above the piece in the center, but I'm not yet sure what.