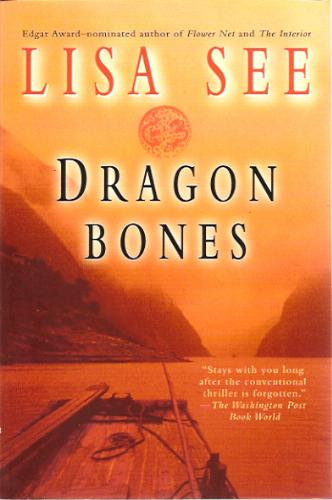 Having dropped off the unfinished - but in need of feedback - grape stem piece at the All Arlington Salon at Ellipse Gallery (more about that later), I'm now focusing on reading the next book to alter and transform, Dragon Bones, by Lisa See. I've chosen this book for several reasons. First, I've been interested in modern Chinese history since my brother decided to go to Beijing instead of college back in 1994. This is set in relatively modern day China, during the building of the Three Gorges Damn, and does a good job of detailing the positive and negative issues involved.

Second, my friend Stan (who reads all Asian American authors and knows who's good) recommended it. Stan knows what's good because he has spent most of the last 6 months organizing an Asian American Book Fair as part of the 2008 OCA Convention here in DC. The OCA started in 1973 as the Organization of Chinese Americans, but has since grown to be "a national organization dedicated to advancing the social political and economic well being of Asian Pacific Americans in the United States" (from their website). The book fair in going to include both Dragon Bones and On Gold Mountain, See's non-fiction account of her family's history, so I'm planning to check it out.

Third, Dragon Bones is about two other things that I'm interested in: archeology/preservation, and grief. I've known I was interested in the first topic for ages - bog mummies, Pompei, the Palermo crypt, etc, have fascinated me since I was a kid. And clearly, issues of preservation and death are big in my work. But only now, as I'm writing this, does it occurs to me that I'm also fascinated with stories of how people deal with grief, and that each of the books that I've chosen for this project so far has included a large serving of that emotion.